Shaykh Abu Eesa Niamatullah is one of the most popular scholars in the UK and is globally known simply as “AE”. He combines experience, knowledge and a modern understanding and application which is unique and utterly relevant. Don’t be fooled by his jocular exterior – he has been teaching and giving guidance for many years, and importantly for our industry, has been successfully leading Hajj groups around the world for over 20 years. His personal attention to students, always “getting involved”, and insistence on turning every trip into a personal tarbiyyah project for each individual, makes him perfect to give that one-to-one time and care to our pilgrims in our “Hajj with AE” Hajj, ‘Umrah and Islamic Tour excursions.

Born in London, England, he tracks his roots to the Naser Kheil tribe of the North West Frontier in Pakistan. He studied both Pharmacy at the University of Manchester and then Anthropology, and then later studied Arabic, Islamic Law and the Qur’an with its memorisation from scholars in a diverse array of locations in the East and West. His time spent with many different teachers has led to a real variety of experiences and depth in the Islamic Sciences which are so famously expressed in Shaykh AE’s multi-dimensional da’wah and teachings.

Shaykh Abu Eesa is a senior instructor at the AlMaghrib Institute where he teaches the Fiqh of Hajj, as well as other subjects. He previously served as the Resident Scholar of Cheadle Masjid in South Manchester, yet still continues to teach Fiqh weekly there as part of an onsite and online initiative known as “Logical Progression.” He was the previous Resident Scholar of the 1st Ethical Charitable Trust in Bolton, an organisation dedicated to civic engagement and Islamic legal and financial education; he was the original founder of ‘Prophetic Guidance’ (PG) and still remains as the main teacher presenting PG’s classes and events such as the “Last Testament” play; his commentary to ‘al-Adab al-Mufrad’ class is still aired today on Islamic TV channels. He is also the Vice-Chair of the Al-Qalam Sharī‘ah Panel, the UK’s premier fatwa body for legal and financial concerns.

We are pleased to announce that all the tour packages offered by Hajj With AE are now powered by Dome Tours.

Dome Tours is a UK tour operator specialising in Hajj, Umrah & Tours having earned an outstanding reputation since 2002

Dome Tours’ crowning achievement was being voted the “Best UK Hajj Tour Operator” by the public in 2017, 2018 and 2019. Organised and hosted by CBHUK, the award is testament to the leadership, hard work and expertise of DT to serve the Guests of Allah and is a mark of distinction in the Hajj & Umrah market.

In recognition of this drive to raise standards, DT was selected to contribute to the Parliamentary Review 2019/2020 as a Best Practice Representative for the Hajj & Umrah industry.

Hajj with AE and Dome Tours will seek to enhance pilgrims’ Hajj & Umrah experience by combining a specially developed Tarbiyyah Program with the outstanding resources and expertise in travel and tours management we are proud to have developed.

This collaboration is another milestone in our efforts to serve the Guests of Allah the Most Exalted with the highest level of care, meticulous planning and a deep sense of devotion. We ask Allah for sincerity, steadfastness and success in this life and the next. Ameen. 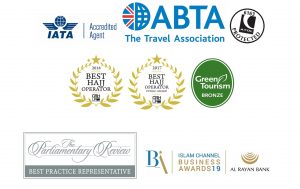